The fine line between fact and fiction blurred last night at a festive holiday reception when a man threw a hardcover book at a woman’s head – in a library, no less. She was seated at a table signing copies of a new edition of A Visit from St. Nicholas. As an author, I’ve never much liked hawking my books at signings, but this represents a new low that’s even more troubling than the usual scenario where no one buys your books.

What precipitated the attack? The woman, Pamela McColl, had just given “expert testimony” in a mock trial concerning the true authorship of  ‘Twas the Night Before Christmas. Widely attributed to Clement Clarke Moore, the work may in fact have been written by Major Henry Livingston, Jr.  The trial took place in the John T. Casey Ceremonial Courtroom in the Rensselaer County Courthouse in Troy, New York, with prominent local attorneys arguing for the plaintiff and the defendant.

The event was part of Troy’s Victorian Stroll, and it was free and first-come first-serve, so I arrived 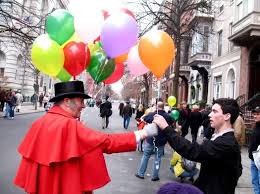 early. In the lobby, real cops were on duty, and there was a genuine security check, complete with the walk-through entrance and the conveyor belt to detect contraband items. The courtroom was packed, and I grabbed one of the few remaining seats. In the back row, I couldn’t hear everyone clearly, but I picked up bits and pieces of Ms. McColl’s testimony. In period costume, she argued against the portrayal of St. Nicholas as a smoker:

The stump of a pipe he held tight in his teeth,

And the smoke, it encircled his head like a wreath.

After colorful testimony from the ghosts of Livingston and Moore and closing arguments from the lawyers, the jury, comprised of randomly selected audience members, decided in favor of Major Livingston. Then everyone was invited to attend the reception next door at the Troy Library, which had no security checks in place. I was savoring a glass of wine and a fillet mignon sandwich when I heard a shout and a crash. Turning in the direction of the commotion, I saw a man tightly flanked by two others who held him by both arms and propelled him out the door of the Victorian reading room.

It’s all right, don’t worry,” said one of them as they did their perp walk. But was it? What had happened? Ever curious, I questioned him later. It turned out that the man had been so incensed by Ms. McColl’s anti-smoking testimony that he started an argument that culminated in his throwing one of her books at her head. When she signed a book for me later, she was uninjured and surprisingly calm and collected. (Fortunately, though hard-cover, the book was light-weight.)

Her version of ‘Twas the Night Before Christmas, published by Grafton and Scratch, was listed in the program as a “Non-smoking edition.” I’m not sure if the book thrower was enraged by her testimony, by the book itself, or by both, but any way you look at it, it’s distressing – maybe yet another reason to forget about book signings and focus on selling books online.

So what happened to the guy? One of the two young men who escorted him out – both lawyers – said they didn’t call the cops, just told him to leave. “We know him,” he said, so perhaps he’s a neighborhood character. Perhaps, too, it helped that he was white, of smallish stature, and that there were no cops on the premises.

Meanwhile, outside the library as darkness fell on the Victorian Stroll, protestors lay down in the street at Monument Square to protest the grand jury verdicts in Ferguson and Staten Island. Try as we may to escape into nostalgia, the twenty-first century and all its inequities remind us we can’t escape reality.